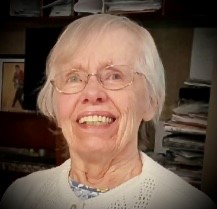 Romola Fritz passed away peacefully with her family at her side on Friday, October 9, 2020 at the age of 86. Witty, wise, humble, and as steady as they come, she was blessed with a heart and love for others that was notably larger than her small, 5'2" frame. She modeled her life after the servant leadership she witnessed in her parents and the prayer of serenity.

From an early age, Romola was guided by a desire to help and educate others, leading her to become active in groups such as the Campfire Girls, where she met and then married her high school sweetheart. She became a loving mother to a son, a daughter, two grandsons, a granddaughter, and a great grandson. Her selflessness and devotion to her family were ever present in her words and actions as she always took great care to be fully present in every conversation. Her ability to offer calm and guidance created an additional sense of security and acceptance for those around her who were struggling.

Romola received her undergraduate degree from Iowa State University and went on to teach high school science. During her time in the classroom she found herself instinctively supporting the 'whole student' (focusing on their academic progress and providing guidance to help them make informed decisions). She also witnessed firsthand the very early benefits of what is now called differentiated learning. These two experiences helped her to realize her professional calling to become a fierce champion of underserved and at-risk high school students. Her desire was that everyone, regardless of where they came from, could have the opportunity to reach their full potential.

Romola continued her education at Creighton University, attaining a Masters degree plus an additional 48 hours in psychology. She served as a high school guidance counselor at Abraham Lincoln in Council Bluffs, Iowa, where she focused on struggling and at-risk students. She was also a member of Delta Kappa Gamma Society.

Based on her work and input, Romola was selected as a founding faculty member and assistant principal of a new Council Bluffs School District pilot program, called the Alternative Learning Center. The center, which was one of the first of its kind in the nation, was created to provide non-traditional and at-risk students the ability to earn a high school diploma in a setting that was more conducive to their life situation. The center would evolve into Kanesville High School, where Romola was selected to be the first principal. Shortly after her retirement in 1997, at the request of faculty and former students, the school created the Romola Fritz scholarship to honor her legacy.

Romola is preceded in death by her parents, Edward and Elsie. She is survived by her husband of 65 years (Rob), her son (Colin and wife, Maria), daughter (Donna), grandsons (Connor, Justin), granddaughter (Katrina), great grandson (Nathan), her sister and brother-in-law (Maria and Robert), and five grand dogs. In addition to her smile, she will be remembered for her love of anything chocolate, potato chips, baking for the holidays, gardening, and crossword puzzles. She remained active in her church as a lector and Eucharistic minister for as long as her heath allowed.

To all whose paths crossed with Romola's, no matter how short-lived, her family wishes to express their gratitude for enriching her life. She cared deeply about her family, friends, faculty, and students. She will be greatly missed.

God blessings to Rob, Colin, Donna and families. I witnessed Romola giving so much to so many Including myself. Had the pleasure of being part of her faculty for nearly 20 years.

Romola was my principal at Kanesville Alternative Learning Center for about 10 years starting in 1992. It was any staff members’ or students’ mistake to be fooled by her small stature. She was a kinds, loving person, but she was also a force to be reckoned with! I can honestly say, Romola was the person that made me fall in love with alternative education and its founding principles. I proudly say that 29 years later I am still a teacher at Kanesville Alternative Learning Center where I met Romola and was forever shaped under her leadership. Eternal Rest Grant to her, Oh Lord, and may the perpetual light shine upon her.

Mrs. Fritz was principal at Kanesville when I met her and approached her to let my program for teen parents from ISU be introduced to her students. She took a risk and accepted me and my program and was I able to teach classes at 3 different time slots at her school, reaching many students for many years. Mrs. Fritz will always have a very special place in my heart for her kindness, trust and wonderful leadership. My sincere condolences to her family on her passing, she was truly a wonderful person and I feel blessed to have had the opportunity to have known her.
Brenda Gryskiewicz

The attached photos are added to the memorial of Romola Fritz to help share their legacy.

Please help memorize Romola Fritz by recording your attendance below.

Thank you for sharing your memory of Romola