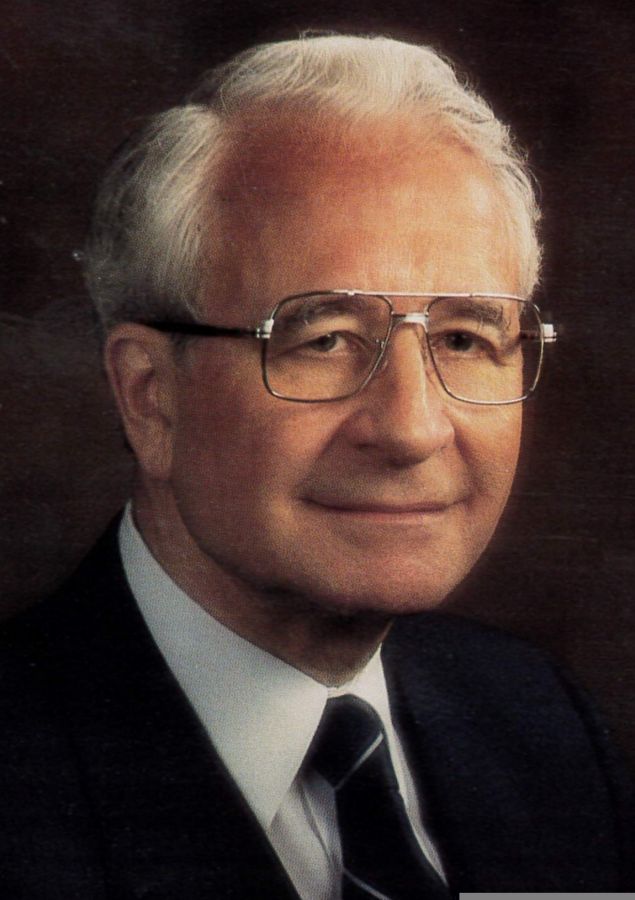 Hans Link, longtime Omaha hospital administrator and former President and CEO of Immanuel Hospital and Retirement Villages has passed away at the age of 98. He had a lifelong commitment to the healthcare and the Lutheran Church.

Hans was born in Stuttgart, Germany to Ludwig and Frida Link in 1921. Shortly after arriving in the U.S. he began working at Immanuel where he met his wife of 72 years, Josephine Barkley. They were married at First Lutheran Church in Omaha on August 17, 1947.

Starting in Immanuel's finance department, Hans served as comptroller and vice-president in charge of financial matters, prior to becoming president and chief executive officer in 1976.

Under Hans's leadership, Immanuel greatly expanded its patient care services. This included new services in cardiology and oncology. After becoming CEO, he led the relocation of Immanuel's Alcoholism Treatment Center and the Immanuel-Fontenelle Home into their new facilities. During his tenure, the Immanuel Village was planned and completed, and the motel was built. Other accomplishments were the development of the Holling Education Center, the Child Development Center, and the Rehabilitation Center. Hans was deeply involved in many local, state, and national health care and hospital organizations. He served as both president and board member of the National Lutheran Hospital Association. He was president of and served on the boards of the Nebraska Hospital Association and the Omaha-Council Bluffs Hospital Association. He was a charter member and president of the Nebraska Chapter, Hospital Financial Management Association. Looking to the future, Hans led Immanuel's development and refinement of the concept of retirement living in a medical center setting with the opening of Immanuel Village in January of 1982. Working with Dan Reeder he led the purchase of the land for Lakeside Hospital and Lakeside Village where he has resided for the past five years.

For his efforts, Hans received a Distinguished Service Award from the Immanuel Board in 1982. In 1983 he received an honorary Doctor of Laws degree from Midland Lutheran College in Fremont. In 1987, Hans retired during Immanuel's centennial year. In recognition of his leadership and vision, Immanuel named its headquarters in the Miracle Hills office area the Hans & Jo Link Plaza in 2015.

After his retirement, he and Jo took many trips back to Germany and throughout Europe. Hans's love of Rocky Mountain National Park began after his first visit in the 1960s and is now shared by his grandchildren and great-grandchildren.

Celebration of Life Services will be announced at a later date.

Hans Link was the consummate administrator at a time when medical care could be managed between the need and the provider and still be called a work of mercy and service. He could combine vision and fiscal consciousness to accomplish a broad mission. He was a man of faith for whom Grace prevailed. His evangelical Teutonic manner was direct and effective for integrity and high regard. Sharing the Immanuel spirit was one of my life’s privileges. Hans Link served the Lord in his generation and is now gathered to eternal rest and perpetual light. May all who mark his passing be comforted in his memory.
Rev. Dennis Maaske

Hans gave me my start at Immanuel. He was one of the greatest visionaries in healthcare during his time as reflected in the Immanuel campus. My thoughts and prayers go out to Jo and the family.

The services for Hans have not yet been added. Please sign up below to be notified when the services are ready.

Get Notified When a Service is Added

The attached photos are added to the memorial of Hans M. Link to help share their legacy.

Thank you for sharing your memory of Hans